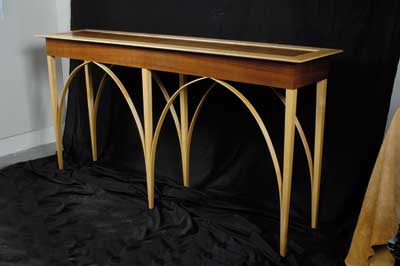 Alvaro and Marc share a workshop at their own benches

If your workshop is at the end of a road which hosts such unglamorous industries as aggregate supply and car breaking, at a south coast port that has seen better days, then you have to try extra hard. In Marc Fish’s case that meant, among other tactics, cashing in on the excitement of last spring’s Brighton Festival, posting large signs along the route so that visitors, who could be forgiven for thinking that their sat-navs were way off course, took the trouble to find him and the seven other full-time makers hiring space in his workshop.

And come they did, and spent money, admittedly mostly on low-value items made for the purpose, but, welcoming glass of wine in hand, they were introduced to the huge variety of furniture styles produced by several makers with very different approaches. It’s called making contacts, something Marc’s very good at.

But how did he jump the divide from banking to entrepreneurial furniture making? In Marc’s case it was by following his creative streak. Now 37, Marc realised he had “artistic tendencies” at school but ignored them. However, after seven years in the bank he got involved in classic cars and set up a company for which he did all the bodywork. He progressed to making metal furniture before realising that, with some training, he could do with wood what he was doing with metal. Two City & Guilds’ courses down the line and he was getting there but it took a John Lloyd course – paid for by selling his beloved 21ft boat with 4.3 V6 225bhp engine – to finally put him on track. “That was the best four months of my life. I learnt a lot,” he recalls.

Up until then he had been selling furniture around Brighton the hard way, going into shops and touting his wares. “I soon learnt that you have to make appointments, that people won’t just see you there and then,” he says ruefully. “It was quite an education doing that. That was in 1999. I had some sort of success in shops but in 2003-2004 started seriously training.”

By that time he was already sharing space with two other makers, and three years ago went for it big time by taking premises on a Newhaven industrial estate with three shops providing space for all the machinery any woodworker could want and workbenches for each maker.

Not only does he share his workspace with Avery Howell, Simon Featherstone, Clive Merrett, Mark Hazell, Derek Jones, Alvaro Rodriguez and Henry Tenent plus part-timers Clare Scully, Annette McDonald and Darcy Dench who rent on a one-day-a-week basis, but he runs furniture-making and related computer-aided design courses too.

So what, apart from cash, does he get out of the arrangement, and what do his fellow makers stand to gain?

“We are all self-employed and all do different things. We get skill sharing, a lot of learning from each other. One guy, Derek Jones, has had 25 years’ experience. What’s really nice is that we can ask each other for help. In some ways it’s a really modern apprenticeship; it’s the future for furniture makers. If you want to stay small you can. Clients like the fact that you do all the work yourself, but to have a workshop on my own would be impossible. I set it up three years ago. I love it. It’s my absolute passion.”

While it is clear that Marc is an artist-craftsman first and foremost, it is equally clear that he has his business hat firmly planted on his head. Take his website for instance: helped by his partner Vanessa – mother of their 11-month-old son Willow – who is a web designer and handles his media needs, he has constructed a site that enjoys a big response and that he rates as a prime selling tool, along with personal recommendations.

“Put ‘cabinetmaker’ into Google and my website comes up on the first page. The keywords are properly done and link to other sites. I joined all the social networking sites which link us back. ‘Cabinetmaker London’ does us well and gets me work with architects. For instance I got work with the British Film Institute doing counters for the bookshop.”

While his favourite periods are Art Nouveau and Art Deco and his exhibition work shows a romanticism which harks back to more leisured and mannered times, he is pragmatic enough to work with whatever his customers want, be that a pair of curve-fronted glazed cabinets with cutlery drawers and lift-out trays in his favourite Macassar ebony together with rippled sycamore and for which he charged a total of Â£27,000, or a Monopoly set coffee table complete with – and he sourced these himself – 1940s’ cardboard tokens, cards and paper money in a sectioned drawer.

When we visited he was about to resume work on an exhibition piece, a super-wide Writing Consul Table in mahogany, standing on delicately Gothic-arched maple legs. “I’m going to rip off the back,” he says determinedly, pointing at an immaculate piece of work. He explains that instead of a plain back he is going to insert buttons which will operate two old-fashioned writing tables, not for writing long letters but for quick billet-doux. “People use emails too much,” he muses.

Typically he has two types of work on the go, a commission from a client and something for himself. On display for this summer’s Brighton Festival was a cabinet-on-stand made while training at John Lloyd’s workshop. It features tiny drawers inside a cupboard; these are fitted with magnets and open via a neat little magnetic stick device. Sweet.

While training with John Lloyd, Marc met other students who were having difficulty finding space and equipment to work. He spent the next two months researching and getting advice about workshop sharing and setting up, coming up with a package that includes: business advice and an introduction to Business Link (a Government-funded organisation that runs courses on book-keeping, marketing, tax, employment etc); design and construction advice; access to a 50-title library including DVDs; list of discounted supplies; free exhibition space and advice; and discounted materials (buying in quantity means saving up to 60% on items such as glue).

Following up an advertisement in F&C; for bench space in Devon with James Morley, he got in touch. James, who has since closed his scheme, said the hardest part in getting established was insurance and health & safety.

“Boy, was he right,” recalls Marc. “It took some two months to get any insurance company to even listen to my ideas. Most of them, after spending 10 minutes on hold and 20 minutes answering questions, said the business description was not in their book of businesses. What a surprise, as there is only a handful in the country!”

Regarding health & safety, for peace of mind he paid for an adviser to visit The Workshop, then spent four months from the end of January 2006 setting up the work spaces, installing machines and completing a mountain of admin. All bench space renters are given a two-hour health & safety induction and sign to say they are happy to use the machines.

“Unfortunately this does not stop users doing something silly or stupid which can be a constant worry,” he says. “Users continue to receive help as and when they need it.” More than two years later and the proof can be seen in the furniture they make.

When I comment on his use of exotic woods, often mixed with European hardwoods, he says that while he loves them himself, so too do his customers who often aren’t too bothered where they are sourced.

“I use Timberline in Tonbridge and check their sustainability. I also ask clients if they want me to use reclaimed or sustainably sourced material. My view is not to waste it and to use it wisely. There is a big shortage of Macassar ebony this year.”

The same Macassar ebony and sycamore combo is seen is his boxes. Â£1,500 would buy a Gentleman’s Box to remind the buyer of times â€œwhen people dressed for the theatre”, its interior housing compartments for such esoteric items as bow ties and watches. I fell in love with a Lady’s Correspondence Box in Swiss steamed pear and quilted Kevasingo (rotary-cut bubinga) veneer with padded leather interior.

The chocolate brown and black of Macassar ebony is absolutely right for his writing sets which come complete with distinctive Mont Blanc ink bottle and demi-lune blotter.

I also admired a massive cherry bowl which Marc says could be the biggest of its type in the world. Measuring over 2ft across, it originated from a tree that was felled in slices and was carved with a chainsaw disc, then sanded and waxed. Pure sculpture.

If Marc’s example is anything to go by, workshop sharing should benefit not only the makers themselves but communities that are ripe for revival and could do with the attentions of an entrepreneur or three.