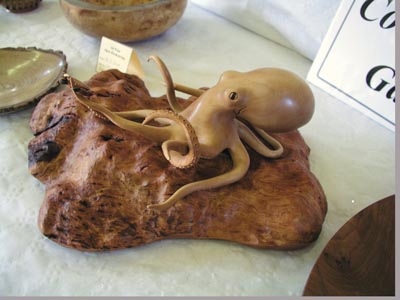 When did you first start to carve?

I began carving in the late 90s, but many years before, I’d seen a picture in a woodworking book it was a beautiful coffee table consisting of three carved ducks which supported a glass top representing the water’s surface. I’d looked at this picture for many years, always hoping that one day I might be able to produce something as good. Eventually, I acquired a few basic tools and carved my first piece there was no turning back, I was hooked!

What made you continue carving?

The creative process itself is what drives me. I’ve made various things over the years, and I suppose it could be any material which grabs me, not just wood. If I’m not carving I start to feel different, as though something is missing. The creative process seems to play a huge part in my life.

What inspires you when you carve?

Other people’s work always inspires me. Sometimes you see a carving by a professional or amateur, but it’s a simple design that seems to move and flow in all the right directions. It’s as though that person has had a moment of genius and produced the perfect piece. The carving process can be one huge rollercoaster ride nothing seems to be going your way and suddenly the piece comes to life and pops out at you. This can be a massive rush and really does inspire me to keep going not as fast as I’d like though.

What are you currently working on?

I’m carving a small crab out of hippopotamus tusk at the moment, about 40mm2, fairly small. I say carving but for the last few years I’ve used many different materials wood, buffalo horn, antler and hippopotamus tusk. Some of these can be carved but I tend to scrape the material away now which allows for much better control when trying to get fine detail.

Which tool wouldn’t you be without?

I use one or two scrapers on a regular basis, also a pencil and rubber I couldn’t be without. I’m also rather attached to my optivisors these magnify the work so you can put fine detail in.

Which is your preferred carving style and why?

Just after carving my first piece I met Peter Benson at a local woodworking show. I was in need of some carving lessons and he invited me down to Essex for one of his courses since then Pete has become a great friend and mentor. He also introduced me to the world of netsuke, having carved many superb pieces himself. I’d always been fascinated with miniature works of art so maybe this is where the interest came from. I now spend most of my spare time carving netsuke and I’m currently being helped by Clive Hallam, contemporary netsuke artist.

What is your biggest carving achievement?

I’ve had lots of help when it comes to carving, but I’ve also put hundreds of hours in practicing, so I guess when you combine the two and end up with a nice piece of work, you’ve achieved something really special. Over the years I think one or two of the pieces I’ve carved really stand out this wouldn’t have been possible were it not for the help of so many other friends and carvers.

Whose work do you most admire?

All the professional carvers produce great pieces. The faces done by John Pace I think are superb (see issue 108, page 20). Also Graham Thompson I’ve seen quite a number of his carvings at BWA meetings and think he’s got a superb eye. All the netsuke artists would be up there for me as well too many to mention!

If you didn’t carve what would you do?

One day I might learn to play the piano, but in my spare time I would have to be carving something!

Describe the view from your workbench and area where you live

I live in Sheffield. A few years ago, I converted the loft space into a small studio so I could carve in comfort. I have a nice view over the surrounding rooftops – the air is a

Many friends ask me to carve things for them – unfortunately a netsuke can take up to 200 hours to complete so I’m a little reluctant to part with them. I do carve pieces of jewellery from time to time and give them away.

Are you a self-critic of your work?